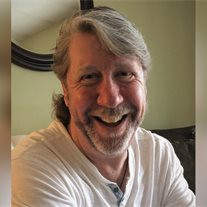 Robert “Rob” E Bordwell II was born on April 24, 1972 to Robert “Bob” and Cathy Bordwell. Rob graduated from Papillion-La Vista in 1990. He was the youngest of three children. He was a general contractor, partnering with his childhood friend, Fred Harlow, whom he loved like a brother. They were very particular about their work and were truly skilled craftsmen. Rob married Elaina Cook on August 22, 1998. From this marriage, Laci May was born, the pride of Rob’s life! Rob spent his life taking care of others and sharing love from every piece of his kind heart. He was likely to be the hardest-working person you knew. Rob will be remembered for his selflessness, sense of humor, love for music, and ability to keep smiling even when life had gotten him down. He was humble and enjoyed the simple things in life; such as, the sun shining on him every day, traveling (especially a recent trip to Ireland), and watching his favorite teams, the Pittsburgh Penguins, as well as Husker volleyball and football. He relaxed by playing his guitar and enjoyed many outdoor sports; such as fishing, kayaking, and tennis. Rob set a good example for others. Just knowing him made you want to be a better friend, son, daughter, or person. We’d like to think that Rob is reunited with his father in heaven and they are together fishing once again. It is hard to say who Rob is survived by as his friends were all welcomed as family. But those who will miss him most are his beloved mother Cathy, his brother David (Rose), his sister Colleen (David) Beckwith and his nieces and nephews; Keaton and Kali Beckwith, Kelby and Cole Bordwell. His daughter Laci will miss his laugh and precious time spent together the most. She will greatly miss his guidance through life. Rob was once asked what he wanted to be remembered for in his lifetime. His response was, "I just want to be a good father". Laci will tell you, "he was the BEST Dad a girl could ask for!" Rob was a good man with a kind and warm heart. Rob was preceded in death by his father, Robert Bordwell, and both sets of grandparents. He leaves behind his daughter, Laci, his mother Cathy Bordwell, his brother David (Rose) Bordwell of Omaha, sister Colleen (David) Beckwith of Forth Worth, Texas and nieces and nephews; Keaton and Kali Beckwith, Kelby and Cole Bordwell.

The family of Robert Eugene Bordwell, II created this Life Tributes page to make it easy to share your memories.

Send flowers to the Bordwell, family.