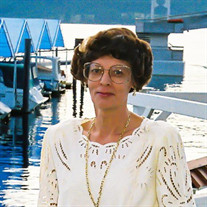 Sondra Lee Tomaszkiewicz better known as Sandy to her family and friends passed away on September 8, 2021. Sandy was born on May 17, 1942, in Hamlin, Kansas to parents Andrew and Florence Reedy. She was the 4th of 5 daughters born to the couple. The family moved to Verdon, NE where Sandy attended grade school and graduated from Highschool. In 1959 Sandy along with her mother Florence moved to Omaha where Sandy attended school to become a typist. In 1960 while reading a book on a bench she met the man she would later marry, Jerome Tomaszkiewicz. Jerry knew immediately that he wanted to spend more time with Sandy, but she claimed to need a little more time to think about it. Ultimately with a little assistance from her mother (who passed on her phone number to Jerry) the couple started dating, and the rest as they say is history. Sandy and Jerry were married on May 12, 1962. Together they move to Millard, NE where they welcomed and raised four children Michael, Cristi, Shelle, and Angie. After raising their family Sandy had a long and flourishing career as a seamstress with Bernina. She was extremely talented and made gorgeous pieces including her daughter’s wedding dress and later baptism, first communion and prom dresses for her granddaughters. She spent 25 years with Bernina and loved every opportunity to be creative. In her later years Sandy loved nothing more than spending time with her family, reading a good book, and cheering on her much-loved Husker football team. Sandy was preceded in death by her father Andrew, mother Florence, and 3 of her sisters (Lois, June, and Shirley). She is survived by her loving husband of 59 years Jerry, her four children; Michael, Cristi (Larry), Shelle (Randy), and Angie (Patrick), her sister Jackie, her ten grandchildren; Sandy, Mark, Danielle, Jonathon, Matthew, Andrea, DJ, Zach, Marissa and Levi, and her eight great-grandchildren; Jadin, Jasmine, Jordan, Peyton, Wyatt, Konnor, Charlotte and Kegan.

Sondra Lee Tomaszkiewicz better known as Sandy to her family and friends passed away on September 8, 2021. Sandy was born on May 17, 1942, in Hamlin, Kansas to parents Andrew and Florence Reedy. She was the 4th of 5 daughters born to the couple.... View Obituary & Service Information

The family of Sondra "Sandy" Lee Tomaszkiewicz created this Life Tributes page to make it easy to share your memories.

Sondra Lee Tomaszkiewicz better known as Sandy to her family...

Send flowers to the Tomaszkiewicz family.