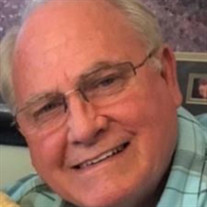 Rod passed a way on Sunday, September 12, 2021 in Omaha, Nebraska at the age of 72 years. He was born in Walla Walla, Washington on Tuesday, May 17, 1949. He was preceded in death by his parents Del and Irene Mackrill; 2 children; brother... View Obituary & Service Information

The family of Rod G. Mackrill created this Life Tributes page to make it easy to share your memories.

Send flowers to the Mackrill family.