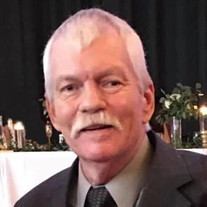 Mark passed away Saturday, July 24, 2021 in Omaha, Nebraska at the age of 61 years. He was born Sunday, October 11, 1959 in Omaha, Nebraska. Mark is preceded in death by his parents James and Barbara Baji. He is survived by his wife of 18 years, Mary Baji; children Cammie Baltz, Joe Peters, and Sonja Dirkse; 5 grandchildren; sisters Sharon Baji, Trish Royal, and Christine May; nieces, nephews, and other family; and Duchess and Shiloh. "Mark was the oldest of 4 siblings. Followed by Sharon, Trish and myself Christine.    Our family grew up in the Morton Park neighborhood close to our grandparents and cousins. Mark attended Sts. Peter and Paul for elementary school and Omaha South for High School. He loved the outdoors and participated in many sports with his childhood friends. He later enjoyed playing horseshoes and pool at Bursick’s Tavern. Along with his friend Mark Lynch they won the City pool tournament twice-his pool stick was named ‘The Brown Hornet’.  Memories of Mark that make us smile    *he failed as a babysitter…i.e. while Trish and I were sitting on the shag carpet in the living watching tv minding our own business…Mark thought it would be a great idea to test the strength of super glue. With that being said he managed to talk us into him super gluing our toes together so we would sit still. Needless to say Mark was in trouble and maybe he thought his plan was successful as he never was allowed to babysit us again.    *He loved 4th of July and fireworks. He would take our Grammy to Missouri so he could buy illegal fireworks and used Grammy as a decoy ‘shot gun’ rider.  *Mark’s love of music-- Trish and I know such singers as Alice Cooper, Tina Turner and Steve Miller Band because of Mark. His friends formed a garage band named Shadowfax in which he played the electric organ. In addition to Mark the other band members were Greg and Dave Budin and Jeff Ables. They played their first gig in Little Sioux IA, Mark’s signature song was Swamp Witch.   *His love of family was evident never missed family occasion whether it was Christmas, Birthdays and other gatherings. You could count on him always being 5 minutes early and his camera was always with him and silly string showed up on many occasions. He mailed birthday cards and we always received them on time. Every birthday card included 2 messages. Old Fart and sealed with spit. On his 50th Birthday Mark insisted on a Roller skating party so all of his nieces and nephews could have a great time.    *Birthday lunches were special to him and recently on Trish’s Birthday in May he wanted to pick the place and Broncos it was." - Christine "I want to thank all the family and dear friends that have lifted my brother in prayer. On many occasions Mark said he felt them a gave him strength on his journey. The strength that only comes from Jesus his Savior.  It was great to share some of our memories of our brother Mark however it doesn’t compare to our lifetime of his love for us and his kind, caring, thoughtful way about him. He loved his nieces and nephews, cousins, aunts, uncles, parents and grandparents. And most importantly his wife Mary.   In closing…. Our brother Mark was diagnosed with small cell lung cancer in December 2019. During his treatment of chemotherapy and radiation Mark continued to work at Oriental Trading. His cancer went into remission for 10 months and in January of this year it returned. Mark opted to start the fight again. Mark remained strong in spirit however the cancer won here on earth. He is now healed and at home in heaven with Jesus his savior, our Mom and Dad, his grandparents and his shot gun rider Grammy " - Trish

Mark passed away Saturday, July 24, 2021 in Omaha, Nebraska at the age of 61 years. He was born Sunday, October 11, 1959 in Omaha, Nebraska. Mark is preceded in death by his parents James and Barbara Baji. He is survived by his wife of 18... View Obituary & Service Information

The family of Mark Anthony Baji created this Life Tributes page to make it easy to share your memories.

Send flowers to the Baji family.