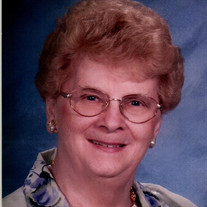 June Beernink, age 88, passed away very unexpectedly in her home on August 18, 2021, just one day after celebrating her and Don's 70th anniversary with Don and their two sons. June was born on February 13, 1933, in Hull, Iowa to Jacob and Hattie Hanenburg. On August 17, 1951, June married Don Beernink in Hull, Iowa. Don and June lived in Sioux Center, Iowa, Luverne, Minnesota, Millard, Nebraska, and had been in their home in Ralston, Nebraska for the past 31 years. June spent her life being a loving stay-at-home mom to her daughter, Loryce, and sons, Russ and Ron as well as a devoted wife to her husband Don. At an early age, June developed a love and joy for music, whether playing her piano, singing at church, or just listening to a favorite CD - a joy that remained with her all her life. June was an avid reader and around her chair were always magazines, newspapers, as well as the current book she was reading. Each Sunday included a visit to her church library and then quite often going out to brunch with friends. Her hair would be fixed just right and June enjoyed looking nice in her colorful dresses - she and Don made quite a handsome couple. June was a good letter writer and enjoyed staying in touch with out-of-town friends and acquaintances. She enjoyed having guests over for a visit, or maybe even a game of dominos or Yahtzee. Family gatherings in her Ralston home were also special to June - including a wonderful meal and then some special treat for dessert that June had just baked. June exemplified the definition of homemaker. Her home was immaculate with her daily dusting and cleaning as well as other projects around the house. A neat and orderly home was important to her. June's grandkids liked to tell her that her home smelled exactly like a grandma's home should - warm and welcoming with the aroma of a cake or brownies baking in the oven. A special time for June was the yearly baking and decorating of Christmas cookies with her grandchildren. The past few years have seen June stay pretty much close to home, with the exception of visits to get her hair done or maybe a trip to the store to shop a little. She so appreciated that her sons lived nearby and could help with the chores that were not easy for her to do any longer. June's faith was strong and unwavering and she knew what a blessing it was to have lived 88 years with 70 of those being with the love of her life. June is preceded in death by her parents Jacob and Hattie Hanenburg daughter Loryce Beernink brothers Preston and Marvin Hanenburg Left to honor her memory are her husband of 70 years, Don Beernink children Russ (Dianne Witmer) Beernink and Ron (Sandi) Beernink brothers Leroy (Kaye) Hanenburg and Don (Cindy) Hanenburg sisters-in-law Mona (Preston †) Hanenburg and Bev (Marv †) Hanenburg several grandchildren, great-grandchildren, nieces, nephews, and other family and friends.

June Beernink, age 88, passed away very unexpectedly in her home on August 18, 2021, just one day after celebrating her and Don's 70th anniversary with Don and their two sons. June was born on February 13, 1933, in Hull, Iowa to Jacob and Hattie... View Obituary & Service Information

The family of June H. Beernink created this Life Tributes page to make it easy to share your memories.

June Beernink, age 88, passed away very unexpectedly in her home...

Send flowers to the Beernink family.