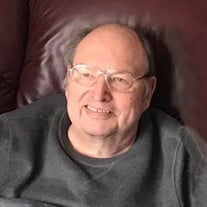 Jerry Koske passed away on October 19th, 2021 at the age of 72 in his home at Papillion, Nebraska with his devoted wife of 48 years at his side. Living 8 years beyond a stage 4 cancer diagnosis, Jerry faced many treatments and related complications. Determined, he steadily endured with a positive attitude inspiring his friends and family. Jerry was born in Oak Creek, Wisconsin, the only child of Elmo and Mildred Koske. An excellent student with a gift for mathematics, Jerry earned an Engineering Science degree at the University of Wisconsin. It was here that Jerry met Janet Richards. Dazzled by his intelligence and a common dry sense of humor (demonstrated often as Jerry helped Janet grade her student’s papers), Janet and Jerry quickly fell in love. Jerry attended Colorado State University on scholarship where he earned a Master’s Degree in Nuclear Engineering and Health Physics and even briefly masqueraded as a cowboy. On June 16th, 1973 after obtaining his master’s degree, Jerry married Janet, the love of his life. Jerry was a distinguished nuclear engineer, being one of only 6 individuals to receive the American Nuclear Society special award for his analysis work on the Three Mile Island accident. His career took him to many locations including Lynchburg, VA; Zion, IL; the National Labs in Idaho Falls, ID; Seabrook, NH; Burlington, KS; and Fort Calhoun, NE. Jerry ultimately settled in Nebraska, where he started his own company (Jerricho Solutions), writing nuclear operator exams for the Nuclear Regulatory Commission, advising the training of operators at the Omaha power plant in Fort Calhoun, and working with the research reactor at the VA hospital in Omaha after being certified by the American Board of Health Physics, among many other things. Jerry was a devoted and loving father to two sons, Jerry and Matthew – both of which he successfully raised to share his fanaticism of the Green Bay Packers. He enjoyed playing his guitars, flight simulators, working on computers, and traveling with Janet to include a stunning trip to the Holy Lands. He adored his six granddaughters and found immense joy in spending time with them. He is survived by the most important people in his life, his wife Janet Koske (Richards); sons Jerry (April) Koske and Matthew (Sara) Koske; granddaughters Elizabeth, Nora, Kathleen, Audrey, Elena, and Marian. The family requests that in lieu of flowers, memorials may be directed to a charity of your choice.

Jerry Koske passed away on October 19th, 2021 at the age of 72 in his home at Papillion, Nebraska with his devoted wife of 48 years at his side. Living 8 years beyond a stage 4 cancer diagnosis, Jerry faced many treatments and related complications.... View Obituary & Service Information

The family of Jerry E. Koske created this Life Tributes page to make it easy to share your memories.