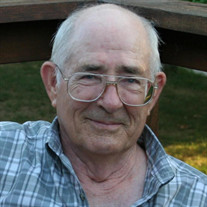 Harold Lloyd Everley was born August 14, 1931 in Morland Kansas. He left high school at the age of 17 to join the United States Navy. He served aboard three different aircraft carriers, The Boxer, The Antietem, and the Bon Homme Richard during the Korean war. After his discharge from the Navy, having completed his GED in the Navy, he enrolled at Wichita State University where he met his wife, Donna Gail Sheldon. They were married August 11, 1956 at Zion Methodist Church in Wichita. Their son, Michael, was born in 1960. Hal and his family resided in Wichita KS until the end of 1969 when the company Hal worked for, ADT Security Services, promoted him to branch manager of their office in Omaha, Nebraska. The family purchased a home in Ralston, Nebraska, where he resided until his death. After 20 years with ADT, Hal left their employ and became branch manager of Wells Fargo Security Systems also in Omaha. In 1987, he left Wells Fargo and embarked on a series of private ventures. He briefly provided food concessions at Omaha area auctions and worked for various auctioneers. At one point he entered into partnership with auctioneer Henry “Hank” McCaw in an antique store and auction business located in the Olde Grainery in Ralston. Hal eventually began purchasing rental properties in North Omaha. Managing his properties became a full-time retirement job that he enjoyed for 30+ years. Hal was a member of the Veteran’s of Foreign Wars, a Life Master in the American Bridge Association and a 32o Mason in the Scottish Rite, Albert Pike Lodge (Wichita, KS). He is survived by his son, Michael (Maribeth) Everley, grandchildren, Adam (Elaine) Everley, Angela Everley; great-grandchildren, Jared, Jordan, Kylee, Kelcee and Josie; brother-in-law Charles Ward (Phyllis) Sheldon, nephews and nieces. He was preceded in death by wife of 64 years Donna Gail Everley; Parents Loyal and Hazel Everley; brothers Lawrence and Jack.

Harold Lloyd Everley was born August 14, 1931 in Morland Kansas. He left high school at the age of 17 to join the United States Navy. He served aboard three different aircraft carriers, The Boxer, The Antietem, and the Bon Homme Richard during... View Obituary & Service Information

The family of Harold "Hal" Lloyd Everley created this Life Tributes page to make it easy to share your memories.

Send flowers to the Everley family.