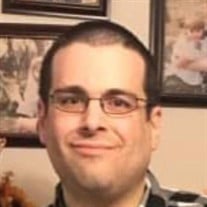 Eric Michael Dilliard was born on July 6, 1986 at Midlands Hospital, Papillion, NE. He was raised in Louisville, NE. He attended, and graduated from, Louisville High School in 2004. He graduated with his Associates Degree in Computer Technology/Networking in 2006 from Vatterott College, Omaha, NE. Eric was united in marriage to Marcy Ann Pugh on June 20, 2009. Their union was blessed with two daughters. Faith Elizabeth was born on November 21, 2012. Chloe Joy was born on March 19, 2018. Eric & family made their home in Ralston, NE. Eric was a loving husband and father. He loved to spend time with his girls; playing video games with Faith and watching cartoons or Youtube videos with Chloe. The parks near his home were frequentd by the family. Eric was an avid music listener. He enjoyed all genres of music and could engage anyone in music conversation. Eric also pursued many political associations. He worked on the John McAfee Presidential Campaign in 2020. His Facebook tagline says "Computer Nerd, family man, activist, and all around smarta**". Eric started his career at Werner Enterprises on January 3, 2006. He started as a switchboard operator; but quickly transitioned to data entry in their Recruiting department. Upon completion of his computer degree; he began working in the IT department. Eric obtained the designation of 'Tier Two Technician'. He was known as 'Ed' at Werner as there were two Eric's in the IT department. Eric was highly regarded and sought after for his tenacity and abilities for computer repair. He often quipped that he "bled Werner Blue". Eric passed away unexpectedly on December 29, 2021 of a pulmonary embolism. Eric is preceeded in death by grandmother, Bonnie (Roger) Branz; grandfather, Edward Sullivant; grandparents, Charles (Dorothy) Pugh; grandfather , James Fluhr; grandmother , Janet Fluhr He is survived by loving wife Marcy Dilliard: daughters, Faith Elizabeth and Chloe Joy of Ralston, NE; Mother, JoDee (Kevin) Sailer of Templeton, IA; father, John (Kris) Dilliard of Louisville, NE; brother, Brandon Dilliard of Louisville, NE; stepbrothers, Terry Dilliard and Christopher Dilliard , stepsister, Angela Dilliard of Louisville, NE; grandparents, Joe & Sandra Kessler of Creston, IA; Mother & Father in-law ,Charlie & Joyce Pugh of Omaha, NE; uncle, Doug Kessler (Marilyn Murphy) of Red Oak, IA; uncle, Jerry (Denise) Dilliard of Houston, TX; and multiple cousins. In Lieu of flowers memorials may be directed to the family.

Eric Michael Dilliard was born on July 6, 1986 at Midlands Hospital, Papillion, NE. He was raised in Louisville, NE. He attended, and graduated from, Louisville High School in 2004. He graduated with his Associates Degree in Computer Technology/Networking... View Obituary & Service Information

The family of Eric M. Dilliard created this Life Tributes page to make it easy to share your memories.

Eric Michael Dilliard was born on July 6, 1986 at Midlands Hospital,...

Send flowers to the Dilliard family.