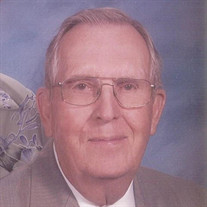 Don Beernink, age 92, passed away peacefully on September 9, 2021, only 23 days after his wife of 70 years, June Beernink, passed away. Don was born January 13, 1929, in Sioux Center, Iowa, to William and Johanna Beernink and grew up on the family farm. On August 17, 1951, Don married June Hanenburg in Hull, Iowa. A short time later, Don enlisted in the U.S. Army and is a Korean War Veteran having served in Korea. Don returned home to Sioux Center and worked for the local newspaper, "The Sioux Center News." Some years later, Don and his family moved to Luverne, Minnesota, where he worked for that town's paper, "The Rock County Star Herald". In 1964, they moved to Millard, Nebraska where Don worked for the "Omaha World-Herald" until his retirement in 1994. While at the World-Herald, Don golfed in the company's weekly league and after his retirement, he golfed even more. Don enjoyed his time on the golf course and usually crushed a drive or sank a long putt that kept him coming back. A special memory for Don was shooting a score of 76 at age 81 at Elmwood Park with his two sons and a grandson making up the foursome. Retirement also allowed Don to attend his grandkid's numerous events, whether it was a soccer, basketball, or baseball game or a music or dance recital. Along with June, Don was a regular fan at the College World Series at Rosenblatt Stadium. Together they enjoyed several vacations, traveling the U.S. and Canada, and Branson, Missouri was also a favorite destination to see the music shows. Don and June were often together and usually seen holding hands. They were people of faith who truly loved and served the Lord. They were involved in the churches they attended and Don spent several years as an usher until his health slowed him down. Don knew what a blessing it was to have lived 92 years with 70 of those being with his loving wife, June. It meant a great deal to both of them that they could stay in their home of 31 years right up until their final days. Together, they shared a wonderful life. Don is preceded in death by wife of 70 years, June Beernink; daughter Loryce Beernink; parents William and Johanna Beernink; and sister Gladys (Pete) Schut. He is survived by children Russ (Dianne Witmer) Beernink and Ron (Sandi) Beernink; brother Vernon (Barb) Beernink; and several grandchildren, great-grandchildren, nieces, nephews, and other family and friends.

Don Beernink, age 92, passed away peacefully on September 9, 2021, only 23 days after his wife of 70 years, June Beernink, passed away. Don was born January 13, 1929, in Sioux Center, Iowa, to William and Johanna Beernink and grew up on the... View Obituary & Service Information

The family of Donald William Beernink created this Life Tributes page to make it easy to share your memories.

Send flowers to the Beernink family.