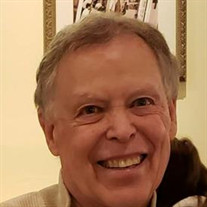 Chuck Asmus was born February 12, 1944 in Stockton, California to Gene and Marion Asmus. Shortly thereafter, he and his family moved to Norfolk, Nebraska. He graduated from Norfolk High School in 1962, Doane College in 1968, and got his Master’s in Education from the University of Nebraska at Omaha. After graduation, he spent 43 years as an elementary school teacher for the Millard Public Schools in Omaha, NE. He was married on March 29th, 1969 to Barb. They were married for 52 years. Together they had two children, Kelly and Michael. Music was always an important part of Chuck’s life. In Junior high, he and his close friends started the band, The Strollers. During the years with the Strollers, he played the drums and sang. His love for music continued through college where he joined the band the Smoke Ring. As part of the Smoke Ring, they recorded two Billboard hits, No Not Much and When Marty Throws a Party, at Phillips Recording Studio (same studio Elvis Presley recorded some of his hits) in Memphis, Tennessee. The Smoke Ring and Strollers were later inducted into the Nebraska Rock and Roll Hall of Fame. The band has continued to perform over the years at Nebraska Rocks and at other venues in the Midwest. Chuck loved all music…in fact, he was also a member of the church Praise Band at Beautiful Savior. In addition to his love for music was a deep love for his wife, his kids and grandchildren….and golf. He and Barb enjoyed spending time listening to music around Omaha, taking walks at the park, and going to their grandkid’s activities in Omaha and Kansas City. And he loved the Huskers. Chuck had the incredible ability to engage with people and loved striking up a conversation at a gathering. He cared for everyone. One of his favorite past times was going to the theater to watch movies, a love that dates back to his time with his Grandpa Fritz. He enjoyed playing golf during the week and even took an occasional golf trip with his son to Gothenburg or Scottsdale. Chuck was preceded in death by his parents, Gene and Marion. He is survived by his wife Barb (Kumm) Asmus; daughter Kelly (Jason) Albers and son Michael (Taylor) Asmus; grandchildren Lauren, Jaden and Ashlyn Albers; Colton and Collins Asmus; brother Doug (Janet) Asmus; brothers-in-law Stan (Alice) Kumm, Marv (Cindy) Kumm, Doug Kumm; Sisters-in-law Audrey (Robert) Johnson, Marilyn (Danny) Keelan; and many nieces and nephews. Memorials have been directed to the Family.

Chuck Asmus was born February 12, 1944 in Stockton, California to Gene and Marion Asmus. Shortly thereafter, he and his family moved to Norfolk, Nebraska. He graduated from Norfolk High School in 1962, Doane College in 1968, and got his Master&#8217;s... View Obituary & Service Information

The family of Chuck F. Asmus created this Life Tributes page to make it easy to share your memories.

Send flowers to the Asmus family.