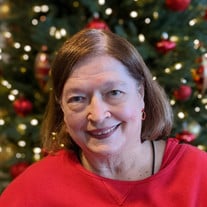 Carol A. Luedders was born on January 29th 1950 in Colby Kansas. She died Sunday November 28th 2021 in Omaha Nebraska at UNMC. Growing up, she was the daughter of a long haul truck driver, and as such, she also moved around quite a lot. Her family moved several times while she was growing up. They lived in McCook Nebraska, Hastings Nebraska, and Wray Colorado where she graduated High School. After High School, she moved to Montrose Colorado and ultimately ended up in Omaha Nebraska where she raised her daughter Andrea. Growing up she was the oldest of 4 siblings, 3 of whom were brothers. After welcoming in 2 brothers, she was desperately looking forward to a little sister, so much so that when her parents announced that they were bringing home another little brother, she was mildly distraught. "You can just leave him at the hospital. I don't want another brother." She also loved to sing duets with her father, Alvin, at weddings and funerals. She also enjoyed playing the piano. Once she left home for Montrose Colorado, she loved spending time with her Aunt Barb, who was 11 years her senior and was very much the sister she never had. For a time Barb lived with Carol's family, and when they did, Barb and Carol shared a room. In Montrose, they would go for walks, and spend all kinds of time together sitting on the front porch, drinking coffee and visiting. She worked as a clerk in a local law office in those times. She also enjoyed gardening and was very proud of her flower bed at her home in Montrose. Carol also acquired a tiny little bundle of joy, Collette, her teacup poodle. Looking back, being in the mountains was one of her very favorite places. Then in October of 1981 one of the true joys of her life came along, Andrea. From that day onward, those two were essentially inseparable. Andrea was Carol's whole world. Every Friday night was movie night. Andrea would dutifully ignore all the "inappropriate" scenes and words in some of the more grown up movies that they went to. They also loved going shopping and eating out all over town. Soon after Andrea came along, Carol took a job at Blue Cross Blue Shield doing data entry. She eventually moved up to Executive Secretary, which was her title when she retired after 29 years. Then once her grandkids were born, they too, became Carol's whole world. She loved spending time at their sports games, especially baseball. She also did a lot to help Andrea when Hunter was a sick and crying baby in his first year. In more recent times she resided at the Walnut Grove retirement community where she met some new friends and enjoyed doing various activities, playing cards, and visiting with friends. Carol was preceded in death by her parents Alvin and Cordelia Luedders. Carol is survived by: her daughter Andrea (James) Johansen, Omaha Nebraska 3 brothers Steve (Mary) Luedders, Aurora Colorado. Bob (DeeDee) Luedders, Yantis Texas. Gary (Deb) Luedders, Omaha Nebraska. Grandsons Hunter and Logan Johansen Many nieces and nephews, family and friends Memorials have been directed by the family to Beautiful Savior Lutheran Church.

Carol A. Luedders was born on January 29th 1950 in Colby Kansas. She died Sunday November 28th 2021 in Omaha Nebraska at UNMC. Growing up, she was the daughter of a long haul truck driver, and as such, she also moved around quite a lot. Her... View Obituary & Service Information

The family of Carol A. Luedders created this Life Tributes page to make it easy to share your memories.

Send flowers to the Luedders family.